The story is about the possibility of love destiny—the notion that lovers are predetermined by destiny to be together. Of all the personality types, only the bleeding-hearted psychics are prone to believe in such things. 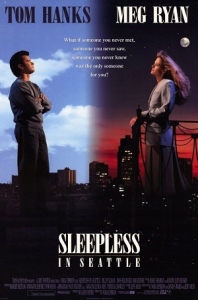 Sleepless in Seattle is a popular 1993 American romantic comedy-drama film directed and co-written by Nora Ephron based on a story by Jeff Arch. The film was inspired by the 1957 movie An Affair to Remember starring Cary Grant and Deborah Kerr.

Sam Baldwin (played by Tom Hanks), a Chicago architect and endearing bleeding heart, loses his wife Maggie to cancer. He and his young son Jonah start anew in Seattle, but 18 months later Sam continues to grieve and has trouble sleeping (hence “Sleepless in Seattle”). Annie Reed (played by Meg Ryan), a Baltimore Sun reporter and charming pointy head, is engaged to Walter, a fellow pointy head, in a practical but passionless relationship.

Sam has experienced love at first sight, and he finds it hard to imagine that he could ever love that way again, which is why he has not started dating. On Christmas Eve the two are home alone, and Jonah—who wants his father to find a new wife—calls in to a talk radio show called “You and Your Emotions.”

Annie’s plan for living is to play it emotionally safe by marrying Walter (played by Bill Pullman)—a hyper-allergic and slightly effeminate man of whom Annie’s highest compliment is that “he’s such a wonderful athlete.” Huh? But after hearing Sam’s moving sentiments on the radio, Annie is experiencing cold feet. What if there is something more to love than agreeing on a china pattern and the number of place settings?

Unlike Sam, Annie is not is not sure how to process her feelings. In vain, she watches romance movies and tries to rationalize the concept of love. She asks a co-worker, “l mean, why did you get married? Was it aIl trumpets and fireworks? Did you believe she was the only person for you? That in some mystical, cosmic way it was fated?” Annie doesn’t trust her feelings as knowledge. After watching An Affair to Remember on TV with her friend and editor Becky (played by Rosie O’Donnell), Annie proclaims, “Now those were the days when people knew how to be in love. They knew it. Time, distance, nothing could separate them, because they knew it was right. It was reaI. It was– -“ Becky finishes her sentence, “A movie. That’s your problem. You don’t want to be in love. You want to be in love in a movie.”

The next day Annie impulsively writes a letter to Sam suggesting that he meet her on top of the Empire State Building on Valentine’s Day—just like in the movie. Annie never intends to send the letter—she’s too practical for that—but Becky secretly mails it behind her back.

In her letter, Annie randomly states that she thinks Brooks Robinson is the greatest baseball player of all time—apparently mutual regard for Robinson is a must for any serious relationship. As it turns out, Robinson also happens to be Sam’s favorite baseball player, and Jonah tries to convince Sam that it’s a sign, to which Sam responds, “I’ll show you a sign. Here’s a sign (as he points to a map of the United States). Where is Seattle? Where is Baltimore? There’s like 26 states between here and there. Now that’s a sign!”

Like Sam, Annie is too much of a realist to believe in romantic destiny. When her mom suggests that destiny explains Annie’s first meet up with Walter as result of a mixed up lunch order (think “The Lunch Box”), Annie responds, “Destiny is something we’ve invented because we can’t stand the fact that everything that happens is accidental.”

In the end, Annie dumps Walter. Jonah manages to bring Sam and Annie together on top of the Empire State Building on Valentine’s Day, and the couple departs (with Jonah in hand) to live happily ever after. It’s a sappy plot with a predictable ending and limited character development, and yet lots of us love it. Why?

Here’s how we see it. The story is about the possibility of love destiny—the notion that lovers are predetermined by destiny to be together. Of all the personality types, only the bleeding-hearted psychics (intuitive/feeling types like the Muse, Poet, Prophet, and Romantic) [Review Personality Traits] are prone to believe in such things—the other 85 percent of us are too practical or intellectual and understand that, “You just can’t keep having all these adolescent fantasies about how exciting your life is gonna be.”  Faced with the harsh realities and logic of life, we want to imagine, at least for a little while, that true love is indeed written in the stars. Then, after the credits roll and the music ends, we can go on with our unromantic and uninspired, but exceedingly realistic and sensible lives.