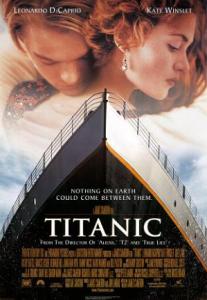 Titanic is a 1997 American epic romantic disaster film about a fictionalized account of the sinking of the RMS Titanic. James Cameron directed, wrote, co-produced, co-edited and partly financed the movie, which stars Leonardo DiCaprio, as Jack Dawson, and Kate Winslet, as Rose DeWitt Bukater. Jack and Rose are members of different social classes who fall in love aboard the ship during its ill-fated maiden voyage in 1912.

The movie was an instant financial success and won critical acclaim—eleven Academy Awards including Best Picture. At the time, one critic said, “You will walk out of Titanic not talking about budget or running time, but of its enormous emotive power, big as the engines of the ship itself, determined as its giant propellers to gouge into your heart, and as lasting as the love story that propels it.” Today, the movie is regarded as one of the best love stories of all time.

Titanic presents a powerful and timeless story about a basic divide in human personality between those who abide by society’s norms and those who are willing or even eager to reject them. The central theme of the film is Rose’s desire to break from the social constraints imposed on upper class women of her time, and how Jack sets her free.

Rose is a 17-year-old debutante, originally from Philadelphia, who is forced into an engagement to 30-year-old “Cal” Hockley (played by Billy Zane) so she and her mother can maintain their social status after her father’s death had left the family debt-ridden. Cal is the heir to a Pittsburgh steel fortune. He is handsome, arrogant and rich beyond imagination. Jack is a talented but penniless artist in his early 20’s. His parents died in a fire when he was 15, and he’s been living on the streets ever since.

In the end, Rose chooses Jack over Cal, but her choice is about much more than the relative desirability of the two men as mates. The central question is why did Rose so desperately want to break free from a life of certainty, wealth and privilege in favor of a life of uncertainty, poverty and adventure? Rose’s personality provides the answer. Let us explain.

Rose is a pointy-headed, psychic hippie turtle (the Professor or INTP) [Review Personality Traits]. Less than two percent of women have this personality type. As the name suggests, Professors seek knowledge and truth not wealth and privilege. And like university professors, Rose needs tenure to guarantee her right to academic freedom. Married life with Cal offers no such liberty.

Like Cal but unlike Jack, Rose is a thinker more than a feeler. Her mom says, “Your father left us nothing but a legacy of bad debts hidden by a good name. That name is the only card we have to play. I don’t understand you. It is a fine match with Hockley. It will ensure our survival… Do you want to see me working as a seamstress? Is that what you want? Do you want to see our fine things sold at an auction, our memories scattered to the winds? My God, Rose, how can you be so selfish?” Rose responds objectively, “How can you put this on my shoulders? … It’s so unfair.”

Rose is intelligent and analytical. At only 17, she confidently selects paintings from unknown artists that will later be regarded as masters and observes that Picasso’s abstract cubist portraits are, “fascinating. Like in a dream… there’s truth without logic.” She reads widely, including non-fiction books about psychology (our favorite topic)! When Ismay says the name Titanic was meant to convey sheer size, Rose asks, “Do you know of Dr. Freud? His ideas about the male preoccupation with size might be of particular interest to you.” Another clear sign that Rose is a pointy head is her brief and businesslike demeanor. When Cal refers to Rose as “sweet pea,” we know that he has badly misjudged her.

Unlike Jack and Cal, Rose is a psychic (intuitive type). She is more interested in future possibilities than present certainties. She trusts her gut impressions. Jack tells her she’s crazy for wanting to get off the ship with him, to which Rose replies, “I know. It doesn’t make any sense. That’s why I trust it.” Rose seeks inspiration over practicality. Jack sees the world as it is. He tells Rose, “I’m not an idiot, I know how the world works. I’ve got ten bucks in my pocket, I have nothing to offer you and I know that.” But Rose’s intuition tells her to let go of the certainty of her current trajectory in favor of an uncertain future she senses must be better. A more realistic eagle eye in Rose’s position might have married Cal and made the best of his money.

Like Jack and Cal, Rose is a hippie (perceiving type). Hippies are spontaneous, adaptable, and often athletic, traits each exhibit in their race for survival on the sinking ship. Rose longs for a life like Jack’s that allows more spontaneity and less mindless routine—like their experience dancing at the below deck party. She says to Jack, “You know, my dream has always been to just chuck it all and become an artist… living in a garret, poor but free! … Why can’t I be like you Jack? Just head out for the horizon whenever I feel like it. Say we’ll go there, sometime… to that pier… even if we only ever just talk about it.”

Unlike Cal and Jack, who are both puppies (extroverted types), Rose is a turtle (introverted type). Turtles are inwardly focused, idea-oriented and guided by internal values. A great example of how Rose sees through external appearances to find the truth within is when she recalls Cal’s presentation of the Heart of the Ocean diamond—“Of course, his gift was only to reflect light back onto himself, to illuminate the greatness that was Caledon Hockley. It was a cold stone… a heart of ice.”

Rose thinks she would rather die than marry Cal. As an old woman, she recalls, “I saw my whole life as if I’d already lived it… an endless parade of parties and cotillions, yachts and polo matches… always the same narrow people, the same mindless chatter. I felt like I was standing at a great precipice, with no one to pull me back, no one who cared… or even noticed. Explaining to Jack why she was preparing to jump from the Titanic into the ocean, Rose says, “It was everything. It was my whole world and all the people in it, and the inertia of my life. Plunging ahead and me powerless to stop it.” As Rose later recalled, “It was the ship of dreams to everyone else. To me it was a slave ship, taking me back to America in chains. Outwardly I was everything a well brought up girl should be. Inside, I was screaming.” Cal represented everything Rose was rebelling against.

Would Rose have felt the same way about her future prospects if she were a man? We think it unlikely. The constraints imposed on ambitious intellectual women of the time forced Rose to rebel. Rose is too intellectual to play her assigned role among the American aristocracy, which she regards as small-minded. She says to Jack, “They’re such small people, my crowd. They think they’re giants on the earth, but they’re not even dust in God’s eye.”

Rose’s personality explains why she wants out, but does it explain also why she is willing to use unorthodox means—including suicide—to escape? Indeed it does. Of the four temperaments, eagle-eyed hippies or STs (Jack and Cal) and pointy-headed psychics or NTs (Rose) are the two temperaments willing to achieve their ends by using means not approved by society. The other temperaments, eagle-eyed tyrants and bleeding-hearted psychics, are committed to achieving their objectives within the bounds of social norms.

Jack sketches and sells portraits of nude women and prostitutes, hardly a socially accepted way to earn a living. He does not hesitate to “borrow” a topcoat and hat without permission if he needs it for disguise to enter first class. And he is unconstrained in his pursuit of Rose even though she is engaged to Cal.

Cal, who has all the wealth in the world, uses money to manipulate others for fun. He fakes being a parent of a young child in order to secure a position for himself in a lifeboat. His actions are not in accord with the standards of polite society, as Rose well knows when in the original screenplay (cut from the film) she tells Cal on the deck of Carpathia, “Don’t talk. Just listen. We will make a deal, since that is something you understand. From this moment you do not exist for me, nor I for you. You shall not see me again. And you will not attempt to find me. In return I will keep my silence. Your actions last night need never come to light, and you will get to keep the honor you have carefully purchased. Is this in anyway unclear to you?”

Unlike Rose, Jack and Cal are relatively free to do as they wish and either cannot or do not need to reject their place in society. Jack has no money and no prospects for a higher place in society, but he is content. Since his parent’s death, he has been completely free to roam the earth living on his wits. Jack is not a dreamer. He is a survivor. As he puts it, “You learn to take life as it comes at you… to make each day count.” Cal has no need to reject his wealth and status because, unlike Rose, these things do not interfere with his objectives. He very much wants to be a wealthy industrialist and master of the universe. But Rose cannot have both the privileges of class and the freedom to exercise her intellectual independence. She must choose.

The turning point, when Rose chooses a life of freedom over a life of conformance, is the scene where Rose watches the mother and daughter having tea. The little girl, wearing white gloves, daintily places a napkin in her lap. She is trying hard to please her mother. In that moment, Rose sees clearly that her life is not intended to be her own, and she decides to be with Jack. In the next scene, Rose is flying on the front rails of the ship.

When Rose falls in love with Jack we feel the attraction. Why do the two seem naturally drawn to each other? Rose and Jack exemplify the “shadow” theory of attraction, in which a person is attracted to that which one has not developed, expressed, or lived out in oneself. Our psychological opposite represents the rejected, abandoned, or unlived half of ourselves. In our romantic partner, we are seeking the completion of ourselves by our opposite. Jack is Rose’s personality opposite in orientation, perception, and judgment—in every way, except attitude. Although they are both hippies, Rose has been unable to live out this part of her personality. Thus, she is drawn to free-spirited hippie in Jack who, just before dying, sets her free by making Rose promise never to give up in the struggle to live life on her own terms—“You must do me this honor… promise me you will survive… that you will never give up… no matter what happens… no matter how hopeless… promise me now, and never let go of that promise.”