“My comedy is about telling the truth.” Joan Alexandra Molinsky, known as Joan Rivers, was an American actress, comedian, writer, producer, and television host noted for her controversial comedic persona where she was alternately self-deprecating or sharply acerbic toward celebrities and politicians.  Time Magazine called her “Stand-up Comedy’s Neglected Pioneer.” Her public persona certainly screamed puppy, […]

“My comedy is about telling the truth.” 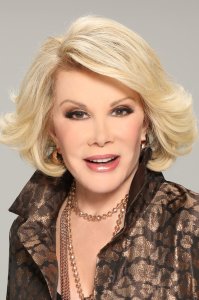 Joan Alexandra Molinsky, known as Joan Rivers, was an American actress, comedian, writer, producer, and television host noted for her controversial comedic persona where she was alternately self-deprecating or sharply acerbic toward celebrities and politicians.  Time Magazine called her “Stand-up Comedy’s Neglected Pioneer.”

Her public persona certainly screamed puppy, but someone who knew Joan intimately reveals that she was in reality a turtle (introverted type). [Review Personality Traits]  Shortly before his death, her husband Edgar Rosenberg said in an interview with The Washington Post that his wife was profoundly different from what many of her audiences assumed her to be.  “Very few people seem to make a distinction between her on- and offstage personalities,” he said. “I don’t know why that is. Nobody thought Jack Benny was stingy offstage. But Joan is a shy, introverted family woman, a very good mother and a wonderful wife.”

Barbara Walters said that more than anything in the world, Joan loved to perform. But Joan didn’t just perform.  She performed her own material. After a false start as an actress, Rivers turned to stand-up comedy. In addition to writing jokes, Rivers wrote and produced TV shows, a Broadway play, and several books.  In other words, she spent a lot of time working on ideas inside her head and then putting pen to paper.

River also needed her time to recharge alone.  “My day starts when I get home and it’s finally over,” she said. “I take my bath and do my crossword. I call it puttering. I may read a book. I go through The Wall Street Journal, I watch television. I want two and a half hours with no one talking… I do that every night.”

Need further evidence that Rivers was a turtle—how about this?  Rivers was not only a bestselling author, but also an avid reader.  Her bookish side didn’t go with her public image as a pop culture commentator, which is perhaps why she didn’t discuss it very much. But in a 2012 interview with The New York Times, Rivers talked in detail about her reading life, revealing that her favorite literary genre was European history up to Napoleon.

Rivers bore the traits of an eagle eye (sensing type)—observant practical, and factual.  Standup comedy provided a release for her unforgiving and seemingly endless social observations.  She didn’t want to break the rules, just to expose how unfair they are. Rivers took keeping up appearances to an extreme. Her home, her clothes, her numerous facelifts were symbols of pragmatism not vanity.  She understood that looks mattered, money mattered, and, in show business, status mattered. “Life is so shitty, so you might as well win,” she said.

Rivers was all pointy head (thinking type).  She would rather be hurt by the truth than comforted with a lie.  “My comedy is about telling the truth,” Rivers once said. “My big thing originally was to say, ‘Can we talk?’ meaning, can we tell the truth?”  Rivers accepted criticisms of her work as the price one had to pay for using social satire as a form of humor: “I’ve learned to have absolutely no regrets about any jokes I’ve ever done … You can tune me out, you can click me off, it’s OK. I am not going to bow to political correctness. But you do have to learn, if you want to be a satirist, you can’t be part of the party… If you laugh at it, you can deal with it, and if you don’t, you can’t deal with it. And don’t start telling me that I shouldn’t be saying it. That’s the way I do it. I would have been laughing at Auschwitz.”

Rivers explained the draw of comedy this way: “The conventional diagnosis of comics holds that they are hypersensitive, angry, paranoid people who feel somehow cheated of life’s goodies and are laughing to keep from crying. I agree, but think comedy is more aggressive than that. It is a medium for revenge.”

Rivers was a confirmed hippie (perceiving type)—inquisitive, open-minded, adaptable, spontaneous, playful, and accepting of others.  Her secret for staying young was to try everything once.  Her motto was “Live for the moment! Nothing is yours permanently, so you better enjoy it while it’s happening.” She had a gift for improvising the funny line, and she loved to play spur-of-the-moment pranks. Complaining that Rivers was accepting of anything except her reluctance to remarry, her daughter Melissa said: “She’s, like, completely supportive of gay rights and everyone should be able to do whatever they want, live and let live, and whatever makes you happy. She has no problem with, like a rhino and a ferret living together, and yet she can’t believe that I don’t want to get married again!”

When asked why she didn’t just retire and enjoy her old age, Rivers responded: “But they don’t get that I love it. All I ever wanted was this. I’m lucky, you idiots,” and imitating her society-lady friends, ‘We’re going to the Kentucky Derby and then taking cooking lessons in Venice and then we are going on so-and-so’s boat and then perhaps five fun days with a group to the Galápagos! And you go, Why? I’ve done all that crap. That’s not retirement to me. That’s death.” Rivers meant to keep moving (and working) as long as she could, and at 81, she was still going strong.

Add it up and you have a pointy-headed, eagle-eyed hippie turtle (the Engineer or ISTP).  The Engineer’s strengths include mastery of tools, impersonal criticism, and search for accuracy and truth.  Rivers was master of the tools of comedy with an obsession for revealing the truth through the perfect joke.